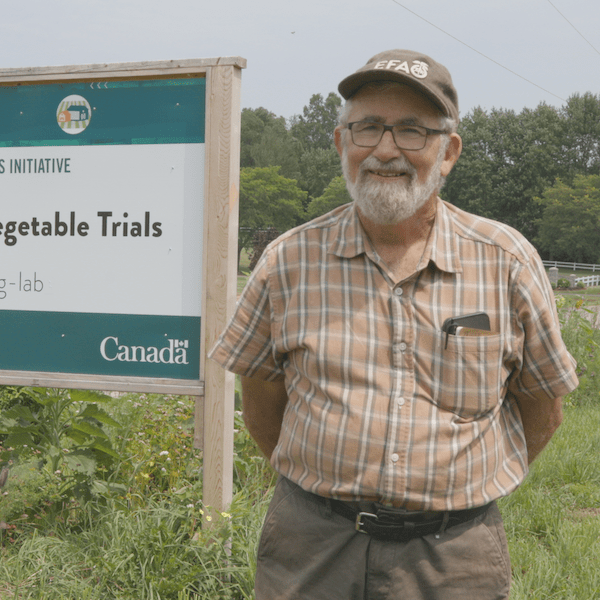 Ken Laing of Orchard Hill Farm and Brett Israel of 3Gen Organics are EFAO’s member-collaborators on the Living Lab – Ontario initiative, in partnership with Agriculture and Agri-Food Canada (AAFC) and several other organizations. Here, Ken and Brett answer questions about their involvement in the initiative, what it’s been like so far, and what they hope to accomplish with their research.

EFAO: What does your Living Lab trial seek to demonstrate or discover?

KEN: We’re trying to develop effective no-till systems for organic vegetables. Developing a horticultural system for vegetables with no tillage is very challenging because we often use tillage to terminate one crop and get another established, and then we come in again with tillage to control weeds. But hopefully we can at least reduce that, even if we don’t eliminate it completely.

BRETT: As a certified organic farm, we are always looking for ways to embody the spirit of the organic standard. We have to reconcile the benefits of organic and regenerative agriculture with the need to manage weeds. In most organic systems, tillage is the main tool. It’s less of an issue with corn or small grains, but it’s a big issue with soybeans. We want the least amount of tillage possible, but that’s a challenge, so this project compares three different ways of doing that.

EFAO: Describe the design of your research.

KEN: I actually started this work last year, so each year I’ve probably had 40 to 50 different plots. They are relatively small, but they are all designed around a mechanized 60” bed system that would be typical of a mid-scale organic market gardener. There are quite a wide range of strategies that we can trial, which means there is a large number of plots. Once we find something that seems to be working, we want to replicate the trials so that we can be more confident that the yields and soil impacts are going to be consistent. So 2020 and 2021 have been the survey years where we look for promising techniques, and next year we will replicate the trials that are working, particularly in garlic and potatoes, which seem quite promising. In addition to that, there are researchers who are looking at more specific outcomes in some of the plots, like how different growing systems affect the diversity of certain beneficial insects and pests.

BRETT: In addition to the usual method of using tillage to control weeds at several points throughout the season, we have three different soybean cropping systems we are trialing. In one area we are double-cropping soybeans following a winter barley crop. As we continue to have more frost-free days, winter barley is becoming a more legitimate crop to grow, and we’re having success with that. If we can harvest it in early July, we have time to seed some beans afterward.  And because the barley has drawn the nitrogen out of the soil, that creates a less hospitable environment for weeds in the beans. So we seed the beans into the winter barley stubble after working it up once, and there is no tillage from then until harvest.

The other approach is a cereal rye-based system. In one area we seeded cereal rye in the fall and used a roller-crimper to terminate the rye and then plant the beans into the crimped rye. That’s true no-till organic beans. In the third plot, we harvested the cereal rye for green forage, and then worked the field once, and seeded our beans in there.

EFAO: What have you learned so far? Why is it interesting and how will it help other farmers?

BRETT: At this point, one of the best takeaways is the importance of ground cover for reducing erosion and keeping life in the soil but also as a real tool in weed control. Particularly for the problematic perennial weeds like Canada thistle. It’s been pretty clear that the systems where something is in the ground over the winter have less weed pressure in the springtime. It makes sense because it was seeded in the fall early enough to offer competition for the weeds. And this year we had growing conditions in March, so basically if there wasn’t anything there it would have been growing thistles, but the cover prevented that.

KEN: We’ve learned a lot, but one example was trying to roll living crops like rye and vetch or oats and peas and then directly planting into them. We’ve discovered that this is really challenging for certain crops. In some cases there has just been no production, so you know, not really acceptable! This year demonstrated that you want to have your soil in a good healthy state before you even try no-till and that adding fertility at planting time or sidedressing later may be necessary for good production.

We’ve also learned quite a bit about deep compost mulch (DCM). It works pretty well, but you have to be careful that there are no weed seeds in your compost, and that you already have good weed control in the plot, or the weeds can come back to haunt you. DCM has proven to be a really successful technique, and I think it’s particularly applicable for new farmers who are starting out, or on a piece of land that isn’t very fertile. DCM isn’t cheap, unless you’re making it yourself, but it could really help bring new or poor land around into production fast.

EFAO: What challenges have you faced so far?

KEN: We purchased a no-till transplanter, which was relatively easy to find because conventional no-till is common enough now. But it had trouble handling all the residue from the rolled cover crops, and organic no-till requires a lot more residue. So the transplanter required a lot of modification. Luckily that’s right up my alley, but that might not have been easy for anyone. What was neat was that once modified, we were able to get it to plant no-till potatoes and garlic as well, even though it might not have been the most ideal tool for the job. And it did plugs too. So we were able to use that transplanter for three different jobs, and that’s important for a 14 thousand dollar piece of machinery.

BRETT: When it came to seeding the soybeans following cereal rye, we had a seedbed prepared, and we drove in the beans, but we didn’t have the right tool to get them deep enough into moisture, so we had a poor population. We ended up borrowing a different drill from a neighbour to reseed and establish a better stand. Hopefully we can plan around that next year. Fortunately the stand looks good right now, so I think re-seeding was the right decision, even if it was a little more costly. I think it’ll pay for itself.

BRETT: My goal by the end of 2022 is twofold. Number one would be to collaboratively come up with an improved understanding of how we can best manage soybeans while reducing tillage in an organic production system and add to an understanding of how those management decisions impact the various metrics around soil health and the vibrancy of our soil ecology. Second would be to create relationships and hopefully establish a new benchmark for co-development research that can serve as a starting point for a lot of other creative inquisitive folks to work together and build a better farm system for everyone.

KEN: There definitely seems to be a lag in development or stunting of growth when you’re planting into no-till conditions. Vegetable roots seem to have difficulty exploring the soil for nutrients, so they lag a little behind other crops. This has been noted as well in no-till field crops, that they’re slow to emerge. But they can catch up and often do yield just as well as other crops, depending on the situation. So one thing I want to achieve is to demonstrate that despite the lag, no-till is still an effective method in horticulture and can work on a larger scale. If we can show that some of these strategies work reasonably well then that’s something someone can try out, even on a small scale on their own farm, with a little less risk. A lot of farmers could benefit from having a leg up in using these strategies or knowing where to start.

EFAO: How do you feel about being in the spotlight?

KEN: We’ve been the subject of many articles, videos and things like that over the years, and I taught the EFAO soils course for a number of years, so we’re alright with it. It’s extra work for sure, and it means I’m not really retired, I’m just as busy as ever — it’s just a different kind of work.

BRETT: I guess I kind of like it! It’s really not about us so much as it is about the philosophy and the concepts and principles. So it’s exciting for me to see not just folks in agriculture showing a real interest in how we manage the land and our interactions with the natural world as a major contributor to our health and that of our planet. I think it’s kind of incumbent upon us to do what we can to advance the cause. This is an equity concept as well. I am fortunate to be in a position of having an established family farm business and there has been the capacity to grow and expand that, so because of our privilege we have a responsibility to take on risks and try different techniques because if it is a failure we are in a better position to weather the storm than other folks might be.

EFAO: What aspect of doing this research are you most excited about?

KEN: Well, garlic and potatoes are both crops that usually require a lot of tillage and leave the soil in pretty poor shape, so if we can get rid of some of the tillage in those two different systems then that’s pretty significant. The number of acres of garlic grown in Ontario isn’t huge, but if we could develop a no-till organic potato system, that could have a huge impact on a lot of acres across the country, so I’m pretty excited about that.

BRETT: I’m just really excited about challenging the established way of thinking about growing organic beans. I have grown to have a fair bit of disdain for them because I know how much tillage is involved and they really aren’t paying their carbon rent! It might take some extra thinking and work at the outset, but if we can get to a place where we get some pretty interesting outcomes, that’s great. That’s what I’m most excited about — finding those outcomes together.

Read more about Ken and Brett’s work on their Living Lab – Ontario pages.