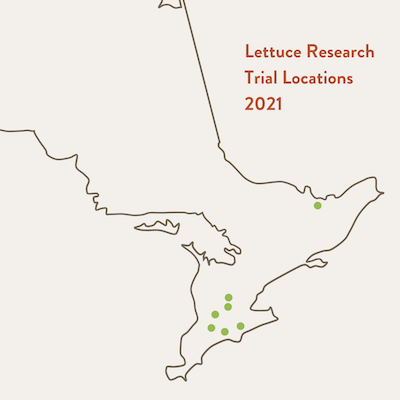 The introduction to this research sounds like a riddle: How did EFAO facilitate a 23-year lettuce variety trial, all from 2019 to 2021?

The answer isn’t a clever pun or tricky turn-of-phrase. The answer is a dedicated network of farmer-researchers, and the concept of site-years.

In research, a site-year is just as it sounds. A particular location, during a particular growing season, which gives a specific context of factors that may range geographically (like soil type) or temporally (like weather). In these farmer-led lettuce variety trials, the experiments were conducted on seven farms in 2019 and 2021, and nine in 2020, giving 23 site-years of data to learn from. Let’s dive in. 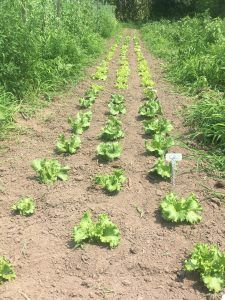 Why? Motivation and Inspiration

Angie Koch owns Fertile Ground Farm, a 100-acre farm outside of Waterloo, producing vegetables, as well as hay and small-scale livestock, with her partner. She has been involved in an advisory capacity since the beginning of EFAO’s Farmer-Led Research Program, and participated in all three years of the lettuce trials.

“We were learning a lot in those early years,” she explains. “With the lettuce trial, I was looking for something achievable and not too complicated.”

In 2019, the farmer-researchers experimented with 11 varieties of fall lettuce. Fall lettuce must “germinate in the heat, and then grow in cool, wet, damp conditions,” explains Ann Slater, another grower who participated in all three years of the trial. She runs a market garden near St. Mary’s. “I was interested to see if there were varieties that could be reliable in the fall.”

For Koch, the motivation was similar. Fall is tricky, she explains. “The plants germinate in excruciating heat in a greenhouse, they go out into scorching hot days, and then the temperature plummets and they have to deal with frost. It’s just so much to ask of a plant.”

However, the fall of 2019 was unseasonably warm and dry. “That made me interested in doing more than one year of trials,” says Slater. “One year only gives you information based on what weather you get that year, and that may or may not be typical.”

In 2020, farmers investigated six summer varieties and five fall varieties of lettuce, hoping to find those which flourished in the unique challenges of each season. Summer can also be hard on the crop with intense heat and humidity, Slater says. The 2021 trial focused on six varieties of green head lettuce in the summer. 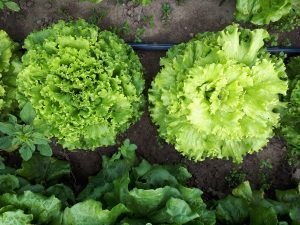 How? The Ups and Downs of Data Collection

A key challenge of farmer-led research on multiple farms is making the experiment’s design uniform enough to provide a basis for statistical analysis, while still acknowledging the specific needs of each farm. EFAO staff Sarah Larsen, Dillon Muldoon, and Rebecca Ivanoff worked with the growers to develop protocols for data collection that worked for everybody, and would garner usable data.

Dedicating time to data collection alongside harvesting can be a challenge, says Slater. Certain parameters, such as days to bolting, didn’t work for her farm. “I have a very small space, so I needed to harvest the lettuce,” she explains.

Multi-farm trials can be helpful, because when certain metrics are difficult for some farmers to capture, you can still gather data from the others. Multi-farm variety trials are “a good place for someone to start out, because it’s not just on you,” says Slater. “You’ve got a group of people to work with, and if something goes wrong – because things always do go wrong – other farmers are there.”

Over the three years, farmer-researchers and EFAO staff gained insight on how to improve the uniformity of observations and data collection, says Koch.

In 2021, the farmers “submitted our observations weekly, and [EFAO staff] looked at them each week,” Koch says. Staff and farmer-researchers addressed any concerns in real time. Flavour trials were popular with farmers and their customers. Tasting “makes a great social media story,” says Koch. “Flavour is always a personal thing,” adds Slater. Some folks like a touch of bitterness, or crunchiness, or softness, or sweetness.

“It was helpful for me to see how other people describe certain lettuce,” she says. Those observations from other farmers help her to describe lettuce flavour and texture to her customers. 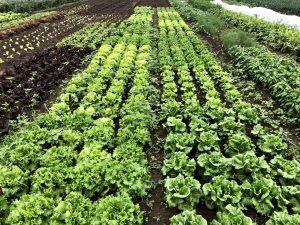 What Did We Learn?

EFAO staff and farmer-researchers teased out key conclusions from the lettuce trial. In 2019, Magenta, a green/red organic Batavian and Ruby Sky, an organic red leaf lettuce excelled in terms of performance in the field and flavour. Both varieties also performed well the following fall in 2020, along with another red leaf lettuce variety, Red Mist. Red Mist had similarly high overall ratings for performance, though germination success was dependent on seed source.

Magenta was also a top performer in the summer of 2020, along with Nevada and Muir, two more Batavian varieties. In 2020, Nevada had a longer harvest window and held off on bolting compared to some of the other varieties.

Both Koch and Slater say that the metric most useful to them was the overall performance rating all farmers gave each variety. The rating combined all the subtle grower observations into one parameter, says Slater.

“Everybody’s a little bit different in exactly what kind of lettuce they [and their markets] might like, but seeing some commonalities in the varieties that worked for me and other people was useful,” she explains. “Certain varieties tended to rise to the top across several farms.” Koch agrees. Even when the specific parameters or statistics didn’t show what the growers expected, they mostly ended up on the same page when it came to those overall ratings, she says.

That consensus could indicate a well-rounded variety, or a variety that displayed characteristics that are hard to quantify, measure and compare, but are truly significant for farmer needs and marketability. The value of those overall ratings was key for “realizing that farmers really have a feel for things. The trial made us pay attention in ways that we might not otherwise pay attention,” says Koch. “Even if the statistics couldn’t pull the story out of all of the numbers, we could see the story and we could tell the story, because we were paying attention differently.”

The ratings helped to show that “Nevada is a superstar, every year,” she adds. “We thought its taste was sweeter and it seemed to last longer every year,” she says. “The consistency of observation and rating between growers gave confidence that even if able to capture the other stuff we weren’t statistically, we could trust that it was there.”

Learnings from the trial have on-farm implications, including direct changes to lettuce variety selection, general experimentation, and marketing. Batavian is not typically a well-known type of lettuce for some customers.

“It’s sometimes been a bit of a hard sell,” says Koch. “So the trial did give me some confidence.” Both summer and fall “trials confirmed that the varieties I had were good ones,” says Slater. “The fall lettuce trials gave me some new varieties to grow.” 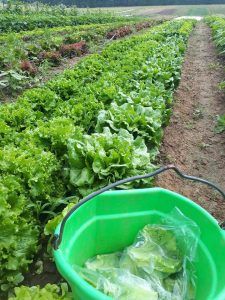 What Next and Who Should Be Involved?

Participating in the multi-farm lettuce trial gave Slater insight on how to set up rigorous research trials on-farm, she says. It’s changed “how I compare varieties, or [practices] on my farm in general,” she explains. “I have a little more awareness of whether or not this is really something that’s a significant difference or just relying on observation with nothing to back it up.”

“It helps me think more scientifically,” she adds. “It helps me think in a different way about how I compare differences that I see within how things are growing in my fields.” Koch explains that she now runs ‘pre- trials’ to consider ideas that she may want to explore in a formal research trial, to help determine what kind of data will answer her research questions. She encourages curious farmers to “jump in on a fairly simple, multi-farm trial, even if it’s not the thing that you think is the most burning question on your farm… just to learn from the process, before you try to set your own up.”