Below are three excerpts from the Farmer Write column printed in our quarterly newsletter.

Topic – Breaking The Rules from Fall 2020

When we started farming one of the rules was “get bigger or get out”. We had purchased a 100-acre farm in 1973 and were learning how to farm and what our land would support. We didn’t have any equipment so were trading our labour for the use of tractors, plows, discs, cultivators and grain drills to do our farming. I remember driving a nice new Leland tractor that belonged to a neighbour. I mean – this was a nice tractor – it started when you turned the key – you didn’t have to put a screwdriver across the solenoid to get it to go. But as I was thinking about how nice it was I also got calculating that to buy such a tractor I’d need more land to justify the expense and if I bought more land I’d probably need to get a full-time off-farm job to pay for it. Though the tractor would let me do more work faster, the cost of it and more land would mean I’d have to do more work on and off the farm to pay for it.

This was certainly the time when the banks were inviting you to borrow money. About every 6 months we’d get a letter from our banker saying “farmland prices are going up – leverage that equity – we’ll loan you money”. Note – they weren’t saying farm product prices are going up and will stay up – you will have more income to REPAY those loans. So we could have borrowed the money against our land to buy a new tractor. But we didn’t. Instead, we bought a team of horses with income from the farm and our part-time off-farm jobs. (We were sustaining ourselves and investing in the farm with a combination of farm income and off-farm income during the first 20 years on the farm.) We didn’t need to take out a loan.

When a neighbouring farm directly across our road came up for sale we thought about it but decided not to buy it. We felt we were not managing our existing land base as creatively and carefully as we could. We already had enough woodlot – the extra barn space would require more investment in machinery to operate it, the extra house could turn into a liability in terms of maintenance and finding suitable tenants and we would rather have neighbours.

The rules we substituted for “Get bigger or get out” were “Get better and stay in” and “Think biologically not just industrially”.

I had three jobs. Milking goats and making cheese were two of the tasks assigned to me, but they were trumped by my temporary and the most important job. I was to spread the love of a visiting billy goat to the nanny goats on the farm, but by all means necessary, I had to keep that goat from getting into the paddock of the young nanny, Houdina. I was WWOOFing in New Zealand on an intentional community/farm, and very inexperienced when it came to the sexual desires of goats in heat with a billy in the vicinity.

After his ‘rounds’, the billy and I began walking back to his paddock when he started sniffing the air and looking around. Then the pulling began. And more sniffing and more pulling and sniffing and pulling. My heart started racing. He was pulling towards Houdina’s paddock. Before I even knew what was happening, I was being dragged by a large billy goat down a gravel laneway straight for Houdina’s paddock. My strength to stop him was nothing compared to a billy goat on a mission.

As he got closer and closer to the paddock, I felt immense relief when I realized that everything would be fine because the gate was closed. There was no way he could get in. That was until he jumped clear over the gate. I somehow managed to clamour over, run ahead of him and put myself between the billy and Houdina. I felt like I was the mother of a teenage child. Houdina was not helping the cause as she instantly turned her buttock towards the billy and flicked her tail back and forth, in what I assumed was an attempt to spread her hormonal desires into the air.

The sight of a billy goat conducting his ‘mating dance’ is one of the most fascinating and stomach-turning sights I’ve experienced. It’s too pornographic to describe. As his ‘dance’ progressed and her tail twitching increased, it became clear I was going to lose this battle. As he moved in for his final act, I found myself lying in the dirt, futilely trying to stop a billy with one worldly task.

By the end of the ordeal, I was left sweaty, panting but unscathed except for the fact that I was covered from head to toe in goat semen. I found out five months later that the billy was successful in his life’s mission when two baby goats arrived to the newest Momma goat on the farm.

To this day, even the scent of goat cheese makes my stomach churn.

It was an evening in late June a while back. I was sitting in the open trunk of my SUV on the edge of the field finishing dinner when I saw the most incredible sight: a neighbour’s truck towing a very large, very full, portable water tank. I can still feel the relief and joy that washed over me at that moment.

It was my first year of farming. I was in a new community with wondering and prying eyes, away from my known support systems and trying to figure out the ins and outs of making a go at this on my own. After years working on other farms, this was both incredibly freeing and completely (and sometimes overwhelmingly) daunting. I was focused on growing vegetables that year and it felt like I had thousands of babies constantly needing coaxing and feeding and encouraging.

That spring and early summer had been incredibly dry. I don’t know if it broke any records but the soil was cracked, the plants were wilting, and I was heat exhausted by mid-May. On this night in late June, we were three weeks into a drought and my nearest water access was a 10-minute walk away. I would fill buckets and drive them out to my field then hand water my plants while trying not to waste a drop and hoping that it was enough for seeds to germinate and plants to survive.

On days they were calling for rain, I would work in my field watching the clouds in the distance, wishing and praying that one would find its way over my dry soil. I texted a farmer 10 minutes up the road: was it raining there? Which way did it look like it was moving? How much fell? With fingers crossed, I would wait to no avail.

That night in June was one of those days when I couldn’t see a way through this. My hoping and wishing hadn’t worked and I was nearing exhaustion hauling water. The long days were too long and too dry. How could I continue this? As a new farmer with limited resources and expertise, I didn’t know how to fix this problem. Over dinner that evening, I found myself starting to resign that perhaps this wasn’t going to happen; perhaps the plants wouldn’t be able to grow; perhaps I just couldn’t do this.

And then I saw it: this big, beautiful, full water tank being towed to my field by a neighbour. I didn’t know it was coming and hadn’t asked for 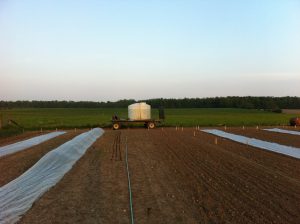 it. But this neighbour (who managed thousands of acres surrounding my small piece of land) heard through the small, interconnected community that my fields were dry and I needed help.

I remember in those early days being offended when people were quick to offer advice and suggestions, thinking they were doubting and judging my abilities. And maybe they were? I would wonder if it was because I am a woman? Or because I was solo? Or because of my age? But in this moment, on that evening, that water tank didn’t offend. It was not a message of doubt, but one of solidarity. The long, hot, and sometimes drought-filled days of summer are a unifying force and there is so much beauty in these community relationships. I understood then that I, not unlike my vegetable babies, just needed a little help to grow.

After the water tank was set-up and my gratitude (and tears) expressed, the neighbour set off for home and I got to work: the cracked soil slowly became softer, the plants started to perk up, and my tears were washed away by this cool water on a long, hot, summer day.

Farmers Write is an opportunity for EFAO members and friends to share real-life short stories on topics inspired by life as a farmer.

The topics are intentionally broad – please feel free to express in a way that makes sense for you and your story. We aren’t as concerned about style and perfect writing, as we are about great stories that others might find truth in as well. We suggest a word limit of 250 to 450 words but are happy to help edit a story. We are able to publish stories anonymously if that allows you to be more free in your writing.  To submit your story, click here.