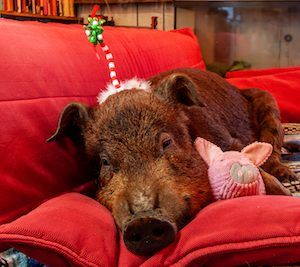 Below are three excerpts from the Farmer Write column printed in our quarterly newsletter.

Whoever thought I would have a pet pig, let alone a theatre pig. As an organic farmer who raises livestock for meat, some people might find it odd that I also have a pet pig who sleeps on my couch and lives the conventional pet life. I guess what I want to say is that you can love animals and know that their purpose is to be food, and you can love the same type of animal and keep it for a pet.

Pickle is a special pig. He came into our lives by accident. We saved his life as a tiny, super-runt of a piglet and in turn he stole our hearts. It took 3 weeks to stabilize his health to the point that he could go back to the barn, and who knows whether it was spending 3 formative weeks with humans, or maybe he has a developmental delay from being chilled as a wee piglet, but Pickle never quite figured out how to be a piglet with the rest of his litter. They’d all be in a big, snuggled, piggy pile and he’d awkwardly be standing next to them. Whenever he heard a human come into the barn he’d come running toward the front of the pen. It just about broke my heart. To top it all off, Pickle was about a 3rd of the size of the rest of the piglets. They were all around 60 lbs and he weighed under 20.

Then one day, he’d been bitten by another piglet. I’m sure it was just the rough and tumble play of a large litter of piglets, but I couldn’t take it. I called the vet. I explained to him how little Pickle was compared to the rest of his litter and after having it explained to me that most farmers don’t try and keep their tiniest runts alive because they won’t amount to much, we decided that he likely wouldn’t grow to past 200 lbs, and definitely not in a fiscally useful time frame… And so I decided that he would be our house pet.

We brought Pickle in from the barn and made him a nest under the stairs. We bought a book on training mini-pigs and attempted to find a food that he would like to use as a reward for his training. Pickle didn’t like anything. After weeks of trialand error we found that Pickle had a particular taste for lamb and rice dog kibble which we used as his rewards. Thus we were able to train Pickle to the bathroom outside, to sit and to give kisses (you’re welcome world). So much for pigs that go crazy for human food and destroy your kitchen, ripping the door of the fridge or getting into your cupboards…

Fast forward. The local, nationally renowned, theatre sent out their company for a play about a pig farmer. We let them meet our pigs, talked to them about raising pigs and made friends with this incredible group of theatre folk. We went to opening night, which was amazing and we met up with some of the company afterwards. Jokingly I said the play was incredibly done, but that I noticed it was lacking any live pigs, and would they like one for the show… 2 weeks later I got a call from the theatre asking if I was serious about lending them a pig for a (different) show. Sure I was, what did they want it to do? Walk across the stage… Well, Pickle was the pig for the job. Pickle spent the rest of that summer as a theatre pig, living part-time in a cottage and doing matinee and evening performances 3-4 days a week and spending the rest of his time back on the farm, sleeping on the couch, playing in his pool and updating his Instagram account.

Despite Pickle’s brush with fame, it hasn’t gone to his head. He’s still the sweet, slightly goofy pig, snoring and drooling on the couch, who stole our hearts in the first place.

I had three jobs. Milking goats and making cheese were two of the tasks assigned to me, but they were trumped by my temporary and the most important job. I was to spread the love of a visiting billy goat to the nanny goats on the farm, but by all means necessary, I had to keep that goat from getting into the paddock of the young nanny, Houdina. I was WWOOFing in New Zealand on an intentional community/farm, and very inexperienced when it came to the sexual desires of goats in heat with a billy in the vicinity.

After his ‘rounds’, the billy and I began walking back to his paddock when he started sniffing the air and looking around. Then the pulling began. And more sniffing and more pulling and sniffing and pulling. My heart started racing. He was pulling towards Houdina’s paddock. Before I even knew what was happening, I was being dragged by a large billy goat down a gravel laneway straight for Houdina’s paddock. My strength to stop him was nothing compared to a billy goat on a mission.

As he got closer and closer to the paddock, I felt immense relief when I realized that everything would be fine because the gate was closed. There was no way he could get in. That was until he jumped clear over the gate. I somehow managed to clamour over, run ahead of him and put myself between the billy and Houdina. I felt like I was the mother of a teenage child. Houdina was not helping the cause as she instantly turned her buttock towards the billy and flicked her tail back and forth, in what I assumed was an attempt to spread her hormonal desires into the air.

The sight of a billy goat conducting his ‘mating dance’ is one of the most fascinating and stomach-turning sights I’ve experienced. It’s too pornographic to describe. As his ‘dance’ progressed and her tail twitching increased, it became clear I was going to lose this battle. As he moved in for his final act, I found myself lying in the dirt, futilely trying to stop a billy with one worldly task.

By the end of the ordeal, I was left sweaty, panting but unscathed except for the fact that I was covered from head to toe in goat semen. I found out five months later that the billy was successful in his life’s mission when two baby goats arrived to the newest Momma goat on the farm.

To this day, even the scent of goat cheese makes my stomach churn.

A Battle of Wills

In 2016, my husband Rob started his herd of Black Angus cattle. They are 100% grass-fed and rotationally grazed. This means that they are contained in relatively small paddocks using a single electric wire fence and moved to fresh pasture every few days. While this has proven to be an excellent method for regenerating the fertility of our fields, there have been some unexpected—and somewhat humorous—challenges.

In spring 2017, being inexperienced in this matter, we asked a farmer friend to show us how to castrate our first bull-calves. We used a very simple method: a small elastic band that cuts off blood flow to the testicles. In the end, our farmer friend told us not to worry. It’s easy, he said. You don’t need my help, he said.

That’s how we ended up with a half-a-steer.

He was perfectly healthy and happy, but he’d retained a testicle. Because of this, he really thought he was a bull. He even looked like a bull, all muscular around the shoulders, although he wasn’t fertile.

Rob knew that any bull he brought in would have to dominate the steer. So he looked for an older, larger animal. In August 2019, Tullamore Cole, a four-year-old Black Angus bull arrived. We nicknamed him Tully.

When Tully joined the herd, he and the half-a-steer immediately got into a head-butting contest. We watched nervously as these two 1600-pound animals pressed their foreheads together and pushed each other backwards and forwards. To our amazement, the sixteen-month-old steer pushed the bull right through the electric wire fence, taking it down completely. The whole herd immediately followed.

As we ran around staking in new fence posts and running another wire to enclose the herd, the battle of wills continued between bull and steer. By the time the enclosure was secure, the steer had clearly won.

The bull retreated to a far corner of the paddock where he stayed for two days alone. Meanwhile, the steer remained with the herd, loudly bellowing his victory about every half hour. Round the clock.

When Tully’s owner learned about the fiasco, he laughed and assured Rob that Tully would still do his job. Fortunately, he was right. Tully rejoined the herd when Rob moved them to a smaller paddock a few days later. It seemed the bull and steer managed to settle their differences. The steer stopped bellowing, and Tully spent the rest of his time on our farm hanging out with the herd.

We’ve all heard the expression “head-butting contest.” Thanks to a visiting bull and one of our own steers, we’ve been up close to the real thing. It was quite a sight!

Farmers Write is an opportunity for EFAO members and friends to share real-life short stories on topics inspired by life as a farmer.

The topics are intentionally broad – please feel free to express in a way that makes sense for you and your story. We aren’t as concerned about style and perfect writing, as we are about great stories that others might find truth in as well. We suggest a word limit of 250 to 450 words but are happy to help edit a story. We are able to publish stories anonymously if that allows you to be more free in your writing.  To submit your story, click here.