An Economic Case for Small Grains with Cover Crops 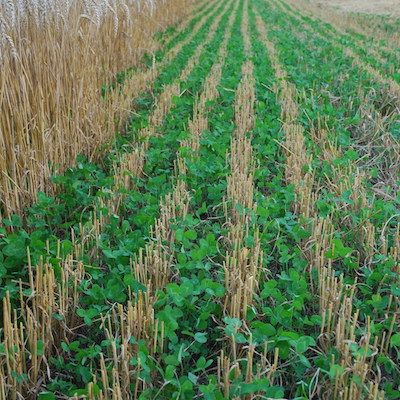 This article was originally published in the Summer 2021 issue of Ecological Farming in Ontario, EFAO’s print publication. The print publication is one of several benefits of EFAO Membership.

As we’ve developed EFAO’s Small Grains Program over the last year, a main concern from farmers was that wheat and other small grains are not profitable crops. Up against high yields and high market prices, it’s hard to beat corn and soybeans. As we dig deeper into the economics of small grains in rotation, we have some good news: small grains can lead to big gains, for both the ecology and profitability of your farm.

Studies on extended rotations from the University of Guelph’s Ridgetown Campus show that — along with general benefits of diversifying your operation — the biggest gain from adding wheat into a corn-soybean rotation is seen in your corn and soybean years. This is because adding wheat to your rotation increases both corn and soybean yields with the same amount of nitrogen (N) fertilizer (Figure 1-middle). In fact, the Ridgetown trials have shown an increased yield up to 17 bushels/acre(bu/ac) of corn and 4-6 bu/ac of soybean in the years following. Those trials at Ridgetown are being expanded to other areas of the province including the New Liskeard Agricultural Research Station, which is home to much of the province’s oat production.

Another big advantage to adding wheat and other small grains into a rotation is that they provide a valuable temporal niche to include late-season legumes. Small grains, which are typically harvested in the summer months, provide an excellent window to establish a legume cover crop or legume forage. Similar to other types of cover crops, legumes like clover and vetch help control erosion, add organic matter to soil and can attract beneficial insects. Additionally, legumes act in symbiosis with nitrogen fixing bacteria. This symbiosis returns nitrogen to the soil through high N content in the leaf and root residue. The N in the cover crop residue leads to greater available N in the soil, which can be used as an N credit for the following year’s corn (Figure 1-bottom). In Ontario, the N credit for corn can be as much as 70 lbs of nitrogen per acre (OMAFRA); and some studies out of the mid-western US put that number at over 100 lbs per acre.

Legume cover crops can be used on their own but can also be used as a part of a mix or ‘cocktail’ which may include many other species such as oats, rye, peas, titicale, and brassicas. While the biggest nitrogen credit will be achieved with an 100 per cent legume, a mixed seed of 50 per cent or more legume will still give you the opportunity for net positive return and may give you the opportunity to see benefit from the other species such as reduction in compaction or greater weed control.

Show me the money

Putting pencil to paper for these claims, we worked in collaboration with Dr. Aaron Delaporte at University of Guelph. Using province-wide averages on yield from OMAFRA, we estimated total costs from seed, tillage, planting, and cover crop kill costs for a corn-soybean rotation, and a corn-soybean-
wheat+legume cover crop rotation.

However, when we included the yield advantage from wheat to corn and soybeans and added a legume cover crop and associated N credit, we estimated an average net return at $313/ac — $33/ac more than the simple corn-soybean rotation. These calculations do not include the potential increase from sustainable straw harvest.

It’s important to remember that we took these numbers from provincial averages and they may not reflect localized data. For this reason, it’s important to calculate cost-of-production on your own farm, and even for individual fields. Regular soil tests can also play an important role in maximizing profits by providing evidence for precision nitrogen use.