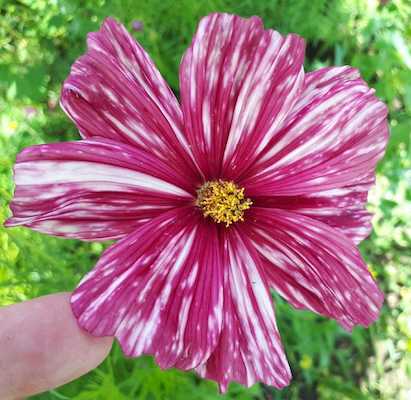 In 2011, Kim Delaney wanted to learn more about flower seed production. As a seed grower and owner-operator of Hawthorn Farm Organic Seeds, she was seeing increased interest in flower growing but realized “there wasn’t much information out there in terms of seed production.”

With this need in mind, she and Patrice Fortier took on the task of presenting on flower seed production at the 2012 Eastern Canadian Organic Seed Growers Network (ECOSGN) conference.

To prepare for the talk, they found a lot of information about growing flowers, harvesting flowers, and even nitty gritty details about germinating like temperatures, days to germination, light requirements,” says Kim.

Very quickly, however, they realized there was a big knowledge gap around isolation distance for seed production. Their only lead was a textbook called Flower Seeds: Biology and Technology, which appeared to be an extensive resource.

When the book arrived Kim remembers “flipping straight to the page on isolation and [being] stunned! There was only one paragraph about isolation distance that said something like: this is proprietary information, and most flower seed production companies will not share this information.”

She continued her search for information by looking at isolation distances for a number of crossing crops, and talking to people who had grown flowers. From these conversations Kim came up with 800 feet as a safe distance to start with — and that’s the standard isolation distance she has used on her farm ever since. 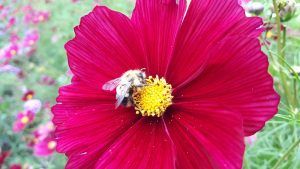 While an isolation distance of 800 feet works, “the problem is that it isn’t based on any data, it’s just what we’ve had to make do with,” says Kim. “And it’s a big distance to commit when growing flowers on your farm.” Alternative isolation methods include barriers, such as a physical structure (e.g. barn), or blocks of bee-loving crops like sunflowers or runner beans. However, these methods also take up space and resources on the farm.”

“When you’re growing something like a zinnia or cosmos, or even a snapdragon, there are so many varieties of each. With an 800-foot isolation distance, you can grow only one or two varieties of that crop type a year, and that’s very limiting as a seed grower — especially for seeds with shorter lifespans. It’s frustrating not knowing how much we could narrow that isolation distance so we can grow more varieties each year,” Kim says.

To address the challenge to shorten the isolation distance for flower seed production, Kim applied to conduct a research trial in cooperation with EFAO’s Farmer-Led Research Program.

Starting in 2019, Kim planted two varieties of cosmos isolated from each other by 400 feet and 600 feet, for a total of four plots. She chose cosmos because it produces single (simple or open) flowers with a single row of relatively flat petals, and is insect pollinated — meaning it is the easiest type of flower to pollinate, and therefore, potentially cross-pollinate. She reasoned that if she observed no crossing with cosmos at 400 or 600 feet, she could transfer this finding to species with double flowers, which are harder to pollinate.

Utilizing the genetics of flower colour, Kim chose white-flowered Purity cosmos and pink-flowered Rubenza cosmos. With pink as the dominant trait, she could test cross-pollination at the two distances by looking for off-type coloured flowers in the grow-out year. Off-types could be anything from softer shades of pink to stripes. At the end of the 2019 season, Kim collected seed from the four plots, jarring and labeling them separately. She grew out the seed in 2020 but the plants didn’t grow well. In 2021, Kim planted the remaining seed, and was finally able to see results.

At 400 feet of isolation, Kim observed four (8%) off-type flowers (i.e. plants that had cross-pollinated) in the Purity cosmos and three (6%) off-types in the Rubenza variety. From this data Kim concluded that 400 feet was not a enough isolation distance for retail sales, and not worth testing again. However, at 600 feet she observed only one (2%) off-type for Purity, and none (0%) for Rubenza. Crossing rates of 1-2% are acceptable for retail seed packs, but not foundation seed, or pure seed stocks used to produce commercial seeds.

When asked about the challenges of the trial, Kim said the biggest issue was finding space. “I was shocked when Aaron and I went out with a measuring tape to set-up the trial,” says Kim. “Seeing the distances laid out really hit home to me the need for narrowing isolation distance because of the space they take up.”

In fact, another grower in Ontario was going to replicate this trial with Kim, but couldn’t find the room to test the different distances, given that the seed from the test distances would be unsellable as a pure variety. 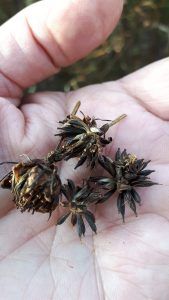 “Out of the challenge of really wanting to learn this information about isolation distance and having to find space for test distances on the farm, came
a potential citizen science project for flower growers,” explains Kim.

Next year, Hawthorn Farm Organic Seeds is hoping to sell trial seed by telling the story of the trial on the seed packets. Customers will purchase a seed pack with both “Purity” and “Rubenza” cosmos seed in separate glassine envelopes.

Years in the making, Kim’s results are helping her to “be braver to narrow isolation distances.” She will use 600 feet for a few flowers this year, maybe some physical barriers as well. She has shared her results with other seed companies, and they are considering narrowing their distances as well.

Overall, a reduction from 800 to 600 feet of isolation results in 25% more seed that Kim and other seed growers can grow on their farms, thereby increasing the capacity of local seed production in Ontario.

Sarah Larsen is EFAO’s Research & Small Grains Program Director and also supports soil health components of EFAO’s education programs. She holds a Ph.D. in Soil Microbial Ecology from Iowa State University, and along with her partner and their daughter, tends the land that they call Three Ridges Ecological Farm near Aylmer, Ontario.