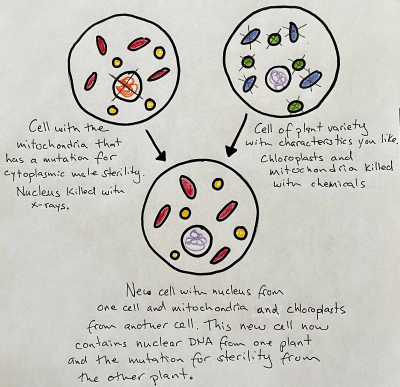 Observing the diversity of plant varieties in the garden always makes me ponder their stories. If plants and people have been doing a co-evolutionary dance for millennia, what is the story of the Quinte tomato, or the Diplomat broccoli, or the Renegade Red pepper?

Many of us have a personal connection to some varieties and their histories, while to many others we do not. More recent histories of some varieties happened in university agricultural research stations or company laboratories, but, as indigenous seed saver Rowen White reminds us, we all descend from people who were seed stewards and plant breeders. What is our role in this continued collaboration with the plants that feed us?

Part of my work as the Seed Program Manager with EFAO is to empower growers to engage in this co-evolutionary dance, stewarding crops that flourish in ecological systems in times of climate change, and nourishing humanity’s ancient relationship with seeds. However, seed work can be challenging at times. Developing an understanding of some of the complexities of seed conservation, production, and plant breeding can help growers navigate those challenges.

Most vegetable growers select seeds from catalogues filled with hybrid varieties, which means many ecological growers use hybrid seeds. Hybrids (or F1 seed, short for first filial generation) are a cross of two highly inbred parent plants. This first generation tends to grow better and produce higher yields than the parent varieties due to hybrid vigour; and these genetically similar F1 plants often have consistent ripening and appearance.

The first step to producing a hybrid is to form inbred parent lines that are highly genetically uniform, and the second is to get these parents to cross and produce F1 seed for planting. Because many plants have both pollen producing parts and egg producing parts, in order to make the cross between inbred lines, you need to prevent the pollen from one line from fertilizing its own eggs. This can be done mechanically, such as by removing the pollen-producing parts of the plants. Because of this extra work involved, hybrids are often more expensive than open-pollinated varieties.

In some crops, creating ‘male sterile’ lines can be done using chemicals that kill the pollen, or by taking advantage of naturally occurring mechanisms. Cabbage, for example, has evolved to cross pollinate such that the pollen from one inbred line is unable to fertilize its own eggs. This is called self-incompatibility. Another way to create hybrid seeds is via one of a number of genetic mutations in the mitochondria of one of the lines that prevents viable pollen being formed while maintaining fertile ovules. This last method is termed cytoplasmic male sterility or CMS.

CMS can be naturally occurring, such as in radishes, carrots, and beets, and can also be created by a process called protoplast cell fusion, which uses chemicals or electric shocks to fuse two partial plant cells from different cultivars, species, or genera together into a single cell.  The use of CMS in hybrid production greatly reduces the cost of producing F1 seed. Thus, the cost of the F1 seed made through this process can be lower.

The debate over whether cell fusion in hybrid seed production should be considered genetic engineering has caused confusion in the organic farming community. Many of us grow delicious ‘Hakurei’ turnips, ‘Gypsy’, ‘Diplomat’, and ‘Imperial’ broccoli, or ‘Denali’ cauliflower: all of these varieties are created using this technology.

Beyond the debate about whether this process should be allowed within organics, there is the issue of who is able to continue the reciprocal co-evolutionary dance.

With naturally occurring CMS there are often naturally occurring genes that restore fertility. However with cell fusion CMS, where the gene for sterility has been brought in from another genus, as is the case for Brassicas, the ‘restorer’ genes are not readily available. Therefore, the process to breed with these cell fusion CMS hybrids is complex and difficult, and likely beyond the resources of many seedkeepers. Though many CMS hybrids have desirable characteristics, these may not be available to on-farm breeders to breed with or adapt to their own regions, and this limiting of access to genetics is growing as companies breed cell fusion CMS into their currently non-CMS lines. The consequences of this are concerning for ecological and organic growers wanting — and needing — genetic diversity to select varieties for locally-appropriate characteristics, from taste, to earliness, to heat tolerance.

“We want seed for the people, we want seeds for the small seed companies, we want everyone to get into this game. We don’t want this to be only a high tech game that only the big boys can do”. – John Navasio, 2014 Organic Seed Conference

How it Affects Local Breeders

The SeedWorks Plant Breeding Club, a group of small scale seed companies and on-farm breeders in Ontario, was hoping to breed a regionally adapted broccoli, but when gathering broccoli seeds for this project, they found that most new broccoli varieties are made using cell fusion CMS. They were told that even older hybrid varieties are being transitioned to contain CMS. They hope to begin collecting broccoli varieties without CMS, especially those that are likely to be dropped by seed companies, to prevent these genetics from becoming unavailable to seed savers, small-scale breeders and ultimately growers and eaters!

Thank you to Heron Breen, Solveig Hanson, Evalisa McIllfaterick, Michael Mazourek, and Aabir Dey for helping me in understanding these issues and in writing this article. Any inaccuracies are my own.