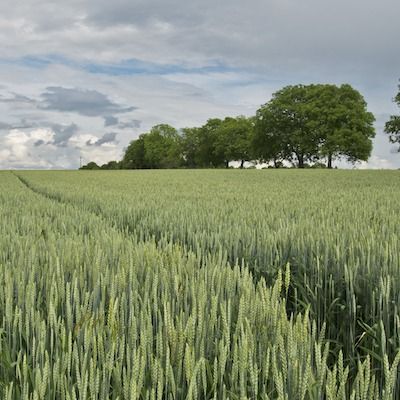 This post was taken from a Publication article published in fall 2020. Brett Israel will be joining the Small Grains Network for their January meet-up on Thursday January 14th at 12:30pm. Small Grains meet-ups are free and open to all.

Brett Israel grew up with the best of both worlds – city life and farm life. He was raised in Kitchener, Ontario, not far from his grandparents’ farm just 45 minutes away in Wallenstein. His dad, Jamie, commuted to the family farm to work with grandpa Carl, on his 600 acre hog and cash crop operation.

In 2014, Brett began to study commerce at Queen’s University, but he spent much of his time on the train travelling back to the farm on weekends and for the summer. After two years at Queen’s, Brett decided that he’d gained what he needed from school and moved back to Wallenstein to farm full-time.

With Brett’s return to the farm, he brought new ideas and management practices. Growing up in Kitchener and during his time at university, Brett had heard what the urban consumer was asking for. He saw that certified organic products could meet the urban demand for quality, comfort and reliability. Jamie and Carl were open to Brett’s ideas and they re-evaluated their business model and ethics.

3Gen Organics – named for the three generations who own and operate the farm – takes a holistic and systems-based approach to farming. With this holistic approach, the Israels began to transition their entire operation to organic in 2015. Over the course of the next five years, they certified their hog operation and all their fields and continued to grow their business by renting new land in the area.

For the Israels, the business case for organic certification was as strong as the ecological impact. “If we wanted to maintain a competitive family business that doesn’t depend on loads of outside support, we saw that we only had two means of competing,” says Brett. “One is on volume and one is on quality. For us, it was about where are you going to play and how are you going to win.”

The Israels decided to bet on quality over quantity. They didn’t want to compete on volume by getting bigger. Growing certified organic grain and pigs allowed 3Gen Organics to remain competitive while maintaining a smaller operation. That’s not to say they haven’t grown in recent years, but their growth has been within a scale that they can continue to operate as a family – from 600 acres in 2015 to close to 850 acres in 2020.

The growth has also supported their holistic principles and has been in large part due to their commitment to small grains. “When you’re doing it well, it’s fun and you need more land to play with,” says Brett.

Brett, Jamie and Carl don’t run a defined standard rotation. They continue to grow corn and soy, but they love the way small grains and cover crops allow them to quickly adapt to weather and market changes. Integrating livestock into their operation has given them extra flexibility with the option to feed the cover crops.

They are able to make cover crops work with any of their field crops and even seed a four-species blend into their standing corn while maintaining strong yields. “[The] cover crop looks great and helps break down corn residue, and we’re still getting 150-180 bushel corn.”

Currently they grow soft red winter wheat, hard red spring wheat, winter and spring barley, cereal rye, hybrid rye, triticale and peas for forage production. Most of the grain and all of the forage is fed to the pigs, either fresh or ensiled. They are able to market most of their wheat locally through 1847, a Foodland Ontario artisan miller in Fergus.

“We have seen the dramatic impact that small grains can have in our rotation. I would say that now, our rotation is small grain centered. They provide us the best opportunity to pivot from one crop to another. We think that we can have small grains follow any of the crops we grow and we have done so with great success. They have been one of the most consistently and repeatable high yielding crops on our farm.”

The commitment to small grains and forages has allowed them to come very close to being a closed-system operation. The only inputs they bring in are seed and mineral premix – and occasionally some roasted soybeans.

They’ve also found many uses for cover crops, which help them meet two important goals: 1) to keep the ground covered as many days of the year as possible; 2) to make sure the soil is still as productive and healthy today as it will be for the next three generations of Israels who might want to grow on the land. “Tillage doesn’t always have to be destructive, if it can be done with low disturbance to get a good cover crop established,” says Brett.

Despite some growing pains during the transition, the Israels are very pleased with the evolution of their operation and see a sustainable future for their business for many generations to come.

“You have to love what you do, and be excited about it. Our customers love seeing what we are doing to improve soil, water, and air quality,” says Brett.

As the Israels continue to look towards the future, they’re also looking for ways in which they can support a thriving agriculture industry. One of the ways they are looking to do this is through improved land access for new farmers. They are currently looking for new farmers who might be interested in landsharing or even free rental of one of their smaller properties, from six to 12 acres. If you or someone you know is interested in such an opportunity, please contact Brett directly through their website, 3genorganics.ca.